There have been many great pigeons in the history of the sport of pigeon racing and there are many at present throughout the world. We all have our stars so to speak. Pigeons like the famous ‘Tee’, ‘Invincible Spirit’, ‘Super Ben’, ‘The Legend’, ‘ Lancashire Rose’, ‘De Barcelona’, ‘Bann King’, to name but a few. (And of course my own personal star ‘The Crooner’). But I wonder if the subject of this piece is the greatest pigeon in the history of our sport. A thoroughbred named ‘Zilvervosje’ whose origins many of the sport's historians would admit are rather vague. However, this great pigeon has played a major role in the evolution and the development of the modern long distance and marathon racer. A light check hen reflecting a touch of silver in her wings who remained fertile until her 16th year and who was the foundation of many great families and strains as well as being an outstanding athlete with successes such as: 2nd National Dax (1950), 3rd National Dax (1949), 27th National Dax (1951), 47th National Saint-Vincent (1951) and 55th National Saint-Vincent (1950).

As to her origins I present to the reader in this article what I have gathered through many hours of research via the computer and the written word of a few European languages. The result is the nearest to the truth that I can find - a truth which has increased my admiration for a great racer and an outstanding breeder who perhaps is the first amongst the greatest. 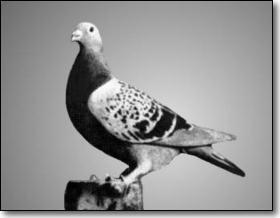 The fertile basis of the appearance of ‘Zilvervosje’ lay with a family of pigeons formed by a Dutch national named L. J. Oomens in 1879; the latter being the father of the better known Oomens brothers (Jan, Harry, Antoon, Gerard, Koos and Jef ) of Breda. Around about 1914 the Oomens were a famous pigeon racing partnership. This arose from their many successes which was partly fuelled by the brothers obtaining outstanding stock from a fancier called Felix Stoffels. In fact between 1930 and 1940 the Oomens won 14 first prizes in classic events. Interestingly some of the old masters of the sport namely Bricoux, Sion and Stassart to name but a few purchased birds from the Oomens. However, with the advent of the 2nd World War and the German invasion of Holland the Oomens pigeons were taken by the invading army and placed in the German Wehrmacht Station at Steenbergen. But prior to the end of the war another Dutch fancier named Toonje Schouteren of De Heen in September, 1944, broke into a loft owned by the invading army and stole three pigeons, naming his bounty ‘Moses‘, ‘Saar’ and ‘The Slet‘. Moses, a blue cock bird born in 1944 and Saar, a blue cheq hen bred in 1943 were to play a pivotal part in the appearance of ‘Zilvervose‘.

From their offspring Schouteren within a few years became well known and by 1949 had won the National from St.Vincent. As his successes grew other fanciers sought his bloodlines and as such people like Baaker Meesters of De Heen reaped much success in the years 1950 to 1952. The latter's fame arising from ‘De 86’ and ‘Zilvervosje’ which were from ‘Moses’ and ‘Saar’ stock. The son of ‘Moses’ and ‘Saar’ named ‘De Slaper’ produced ‘Zilvervosje’ (when mated to the 'Goris Duivin’) and when ‘Zilvervosje’ was mated with ‘De 86‘, a son of the golden couple (‘Moses’ & ‘Saar‘) the outcome at Meesters loft was the birth of ‘Twippen Doffertje Van 49‘. The latter, amongst others, was purchased by Jan Aarden who paired it with his ‘Dusuffoy Duivin Van 48‘, which in turn produced Aarden's three best pigeons - ‘37‘, ‘38’ and ‘49‘. Thus a major contribution of the Oomens via Schouteren via Meester to the Aarden dynasty.

So far we have seen the background to the appearance of ‘Zilvervosje’’ and her contribution to the appearance of the Jan Aarden strain but when we look at the origins of outstanding long distance and marathon families of our flying athletes of the 20th century and indeed the initial years of the present century the influence of 'Zilvervosje’ is there. And this is not limited to the Aarden dynasty of racing pigeons alone. For example, if we look at the pedigree of the great ‘Spin’ of Jef van Wanroy we will see that the sire is a grandson and the dam is a granddaughter of ‘Zilvervosje’. And as the ‘Spin’ was the foundation of the Kuypers Bros. family and that of Peter van den Eijnden (to cite but a couple) they carry the bloodlines of our subject.

Of course when we consider the various families and strains which constitute the Aarden dynasty, ‘Zilvervosje’ stands so proud and serene (as in her photo). The ‘500’ of Giel van Agtmaal, the ‘131’ of Jan de Weert, the ‘Oude Witpen’ of Toon Stoffelen, the ‘10’ of Toon Ligtenberg, the ‘Oude Doffertje’ of Janus van der Wegen, the ‘Kleine Naut’ of van den Burgh as well as the strains of Piet Lazeroms, Wim Muller, K Nipius, and so on…

Just as in other thoroughbred sports i.e. greyhound and horse racing, for example, there are outstanding sires and dams who appear in the pedigrees of the best racers and breeders, in our sport we have the likes of ‘Zilvervosje’ who I have no doubt warrants the cloak of immortality. Surely as a pigeon whose influence is being felt today wherever the sport has taken root, our subject has become an icon.